The Return of Bytecoin: Challenging Monero?

Once seen as a defunct asset, Bytecoin is gaining traction again.

Bytecoin (BCN) has grown rapidly in the past day, and may be on the way to making up for the lost years.

It was only in the past month that BCN rose to one cent levels, despite an earlier attempt to command higher prices. Until the summer of 2017, the coin was at triple-zero prices, around $0.0002. BCN is on the recovery against BTC, but still far from the summer peak.

The most probable reason for the recent spike in BCN prices are efforts by the team to launch a new API on January 6. But the past six months have seen serious rebranding efforts and more transparency on this project.

Stay tuned 24/7 with the Bytecoin Status Channel! Status of all @Bytecoin_BCN softwares in one place https://t.co/7YsG8avwrA #ByteCoin #BCN

The Bytecoin project is known for being the predecessor of Monero, although it came with a pre-mining scandal, a group of mysterious anonymous founders and the attempt to control the first version of Monero. Bytecoin was one of the last remnants of a group of CryptoNote coins, of which most are defunct.

Bytecoin is also the predecessor of a new group of coins based on the CryptoNote algorithm, which include the Electroneum anonymous coin, as well as the attempt to create a "Bulgarian national cryptocurrency", the Lev Coin. 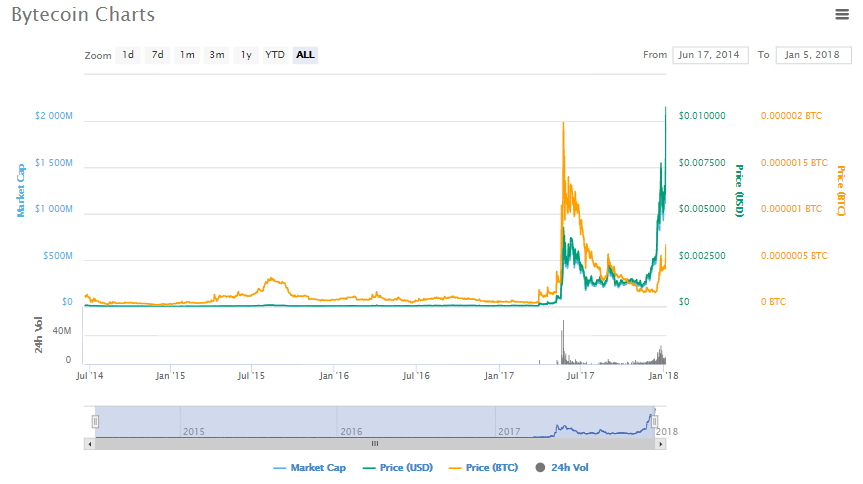 Bytecoin is still very far from gaining the status of Monero, but with a low enough price, it is an alternative asset to accumulate and use, since it focuses on the same technology. For now, it remains unknown what sort of community Bytecoin has, but its image is improving, especially with the rising price.

At the moment, there are reports that deposits and withdrawals of Bytecoin are impossible on Poloniex. Only Reddit rumors abound when it comes to new listings, such as the recently trending Binance. But the BCN price may have to stabilize and prove itself after the rapid climb, before the coin becomes established.