Bitcoin (BTC) Technical Analysis: Crashes $250 in 1 Hour, Here Might Be Why

Bitcoin was looking strong around the $4,000 area for most of this week until $8 billion suddenly fell out of the crypto market at around 06:00 UTC this morning. The sporadic sell-off has caused widespread losses across the entire altcoin market and has sent Bitcoin tumbling back down to the $3850 support below. While it is not certain who or what caused this sharp decline, there are a few likely culprits that could be to blame.

It is no secret that the crypto mining industry suffered the worst year on record in 2018. Bitcoin’s value plummeted by more 78% from its new year open price to its EOY close and hashing difficulty remained disproportionately high. Around October 18, the mining industry began to thin out as smaller operators could no longer turn a profit after running costs, leaving only larger companies to continue verifying transactions on the network. This mass exodus of smaller miners had the effect of reducing the Bitcoin network hashing rate, which in turn helped to correct BTC mining difficulty back down so that mining still remained marginally profitable for large-scale operators.
Since that correction however, more miners have returned to the Bitcoin network. On December 31, difficulty jumped up 10% as the cycle started to repeat itself. In three days’ and ten hours’ time, Bitcoin difficulty is estimated to jump again by nearly 8%.

With Bitcoin’s price stagnating back around $3,850, miners will once again be at risk of operating at losses. In order to stay on top of electricity bills and maintenance costs, it’s likely that a lot of large firms will have to sell off a vast majority of their BTC holdings in order to stay above water during this difficult time. This could be one potential explanation for the sudden Bitcoin sell-off that rocked the market today.

Another potential cause of the sudden crash in the market could be large ICOs, Blockchain companies or Exchanges selling off their substantial BTC holdings into fiat to fund new roadmap developments, platform features, cover expansion costs for the new year ahead etc. With a number of top-ten cryptocurrencies and leading platforms looking to bring out flagship updates over 2019 and leading digital asset platforms looking to expand globally, there’s a likelihood that one of these companies could be the guilty party.

On the 1D BTC/USD chart, we can see that the #1 cryptocurrency recently broke out above the downtrending neckline on Jan 6 and threw back on it as a new support. From there, the asset appeared to readying itself for another potential bull run until today’s crash kicked BTC back down below $4,000.

Looking at the Bitcoin futures market, we can see that the number of BTC shorts at the moment is surprisingly low, which suggests that the crash was not caused by an accumulation of short trades breaking Bitcoin’s back. Furthermore, we can also see that the crash managed to squeeze a number of long trades out, forcing some derivative traders to close their positions at a loss to avoid further damage. 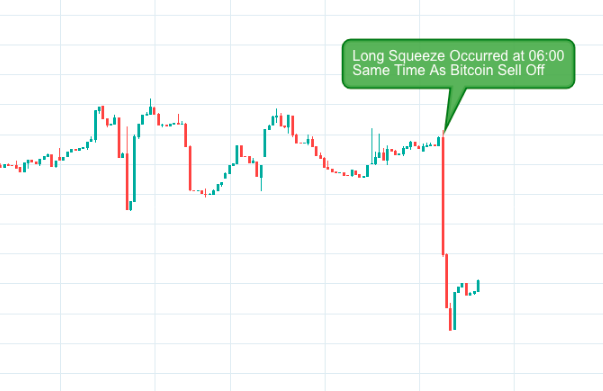 Whatever the reason, it appears that this was simply a dump rather than a trend reversal as a number of indicators are still supporting a bullish trend despite the crash:

-The Aroon Up line is still bullishly above the Aroon Down line, which implies that short-term momentum is still favorably bullish.

-On the MACD indicator the 12MA is still holding above the 26MA, with both lines still above the signal line and buying candles on the histogram.

-There is a bullish T/K crossover on the 1D Ichimoku indicator and for now, candles are still inside the resisting Kumo cloud, which is a promising sign.

Usually, we would expect BTC to start unraveling further as it quite often does following a heavy sell-off. Right now, however, the asset has not moved at all since this morning, which suggests that a vast majority of traders are uncertain now over which direction Bitcoin is likely to go next. This could mean that we might see Bitcoin make a gradual recovery back to $4,000 by the end of the week if bullish confidence returns.
All eyes will now be on the $3,850 level and whether this intraday support will hold off any further bearish activity until BTC bulls push back.

All ROIs and losses are calculated from the asset’s current value at $3,867.00 (AToW). Price targets are shown as the blue dashed lines in the image below.

Ontology (ONT) Technical Analysis: Waiting on These Confirmations Before We Get Bullish About ONT

Neo (NEO) Technical Analysis: Huge Bullish Potential on 1D and 4H Charts, But Will it Break Out?

Five Most Active Altcoins: How they Fared in 2019