ZenCash, a privacy-focused cryptocurrency hard forked from Zclassic, is recovering well in tune with the general market today. The asset has banked a 6.46% gain against BTC pairing in the last 24hrs after springing off its strong base support. However, trading volumes are still fairly thin at just $747,000.

In the main news recently, ZenCash announced a number of new updates including the new beta launch of network supernodes and the eagerly anticipated rebranding which will be unveiled on August 22nd, according to official sources.

In other news, Zencash Co-founders Rolf Versluis and Rob Viglione were discussing in the latest bi-weekly AMA some general improvements that will take place on the project’s PoW network. These improvements include increasing network security measures in response to the devastating 51% attack that occurred on June 3, 2018, where a hacker was able to gain control over the network and double spend $550,000. There have also been talks of a potential hard fork proposal to change ZEN’s equihash algorithm so that the new Bitmain AntMiner Z9 Equihash rig will not be able to mine the asset. Addressing this ASIC-resistance issue will be critical in maintaining the decentralized nature of the ZEN network and its well-established GPU mining community.

With so many proposed changes to the ZenCash project recently as well as a major rebranding soon, will we see ZEN get catapulted into a new bullish phase or struggle to shake off its recent security issues? Let’s see what the chart tell us.

The Story So Far

On the 1D ZEN/BTC chart it is clear straight away that the asset has been tracking inside a large channel for nearly a year, with a very strong uptrending base support and a well-tested resistance above.

In the analysis video above we can see that the base support has created several reversal opportunities in the past, including a textbook bullish triple bottom in mid-December that helped springboard ZEN over 200% in 12 days.

Dissecting through the price action is another smaller channel which has acted as both a key supportive and resisting area for ZenCash. Over the course of this year, the middle channel has acted as a useful guide in determining whether a bull run off the base support is likely to retest the main upper resistance level, simply by observing if it holds above this channel or not. During the more recent price action, we can see that only the candle wicks were able to find the middle channel and highlights that the overall trend may be starting to weaken.

Perhaps strong bullish momentum from the rebranding will be able to elevate ZEN beyond the middle channel again and eye down the upper channel resistance somewhere near the 600,000 Sats mark over the coming weeks.

When we draw a Fibonacci channel over the top of the price action, we can see that the asset has adhered well to these mathematical sequence levels; including the small inside channel which falls pretty close near the 0.382 and 0.5 fib levels.

Over the last two months, we can see that the asset met strong resistance at the 0.5 fib level and corrected all the way back down to the lower 0.886 fib level, which sits along the base support line.

Right now ZEN is battling with the 0.786 fib level after a bullish rally lifted the asset off the bottom two days ago. Looking at a number of chart indicators over 2hr candles, we can see a few promising signs that could be hinting at a continuation over the next few days. 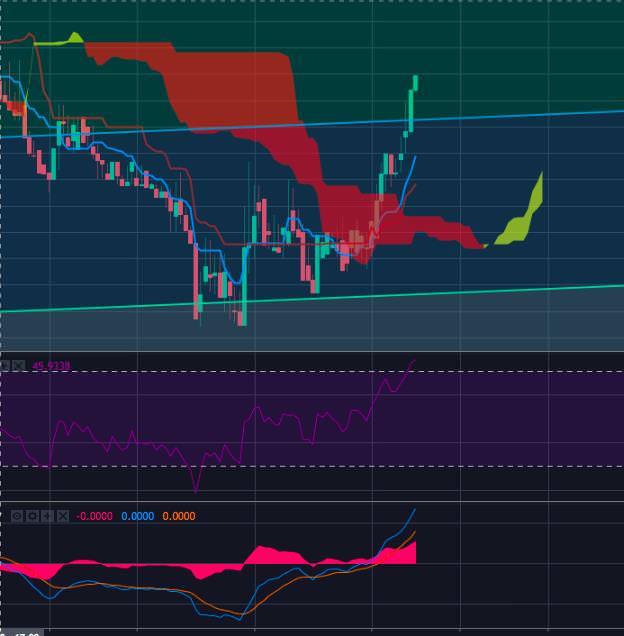 Using the Fibonacci extension tool, we can predict where this asset is likely to peak during the next uptrending movement. 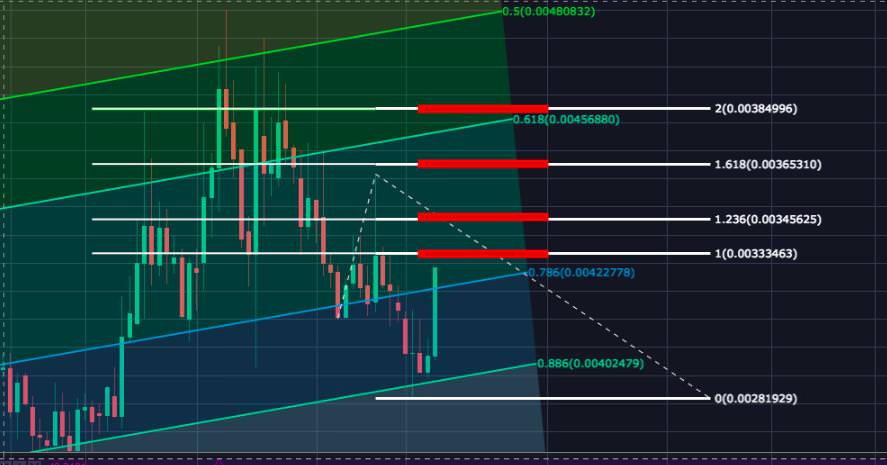 Price Target 1: 1.0 fib level at 333,463 Sats is the first likely target, where the first measured impulse leg closed at.

Price Target 2: 1.236 fib level at 345,625 Sats. Again, this coincides with a strong support/resistance level that has developed over the last three months.

Price Target 3: 1.618 fib level at 365,310 Sats. This has not been a particularly strong level in the past but could hinder the asset’s progress towards the top price target.

Price Target 4: The 2.0 fib level at 384,996 Sats is a 200% extension of the first measured impulse leg and falls perfectly at the closing price of the strong green candle, where the price action tried to head-test the earlier high.