Why Jack Dorsey Is Buying $10K in Bitcoin (BTC) Every Week

Twitter CEO Jack Dorsey made his feelings about cryptocurrency clear when it was revealed he is investing significant sums into Bitcoin each week.

In a recent episode of the Tales from the Crypt podcast, Twitter CEO Jack Dorsey revealed that he is periodically accumulating Bitcoin to the tune of $10,000 per week.

When speaking about Stack Sat Saturday, he said that he “would have participated” but had already gone over his $10,000 weekly limit on Cash App, a money transfer application he uses.

The bear market on Bitcoin that started in January last year doesn’t appear to have swayed Dorsey one bit, as he remains ever-confident that the cryptocurrency will have a promising future.

“Imagine being born this year, growing up only knowing that the potential for a global currency exists. That is exciting. What that person does with that realization is amazing. It feels like that just accelerates things even faster. So I think there’s a massive acceleration that’s going to happen within the next 10 years,” he said in the podcast.

This isn’t the first time Dorsey used the ten-year figure as a marker for his prediction. Last year in March, he claimed that in that same time frame, Bitcoin would be the only currency used for internet purchases.

Other cryptocurrency enthusiasts, including organizations like Weiss Ratings, aren’t as optimistic about Bitcoin’s future, but instead, believe that it will be overshadowed by other more recent players that have entered the market like EOS and XRP.

Tracking Bitcoin’s dominance, it continues to have the lion’s share of the entire cryptocurrency market as a whole, but the data shows that this might not hold up for long. 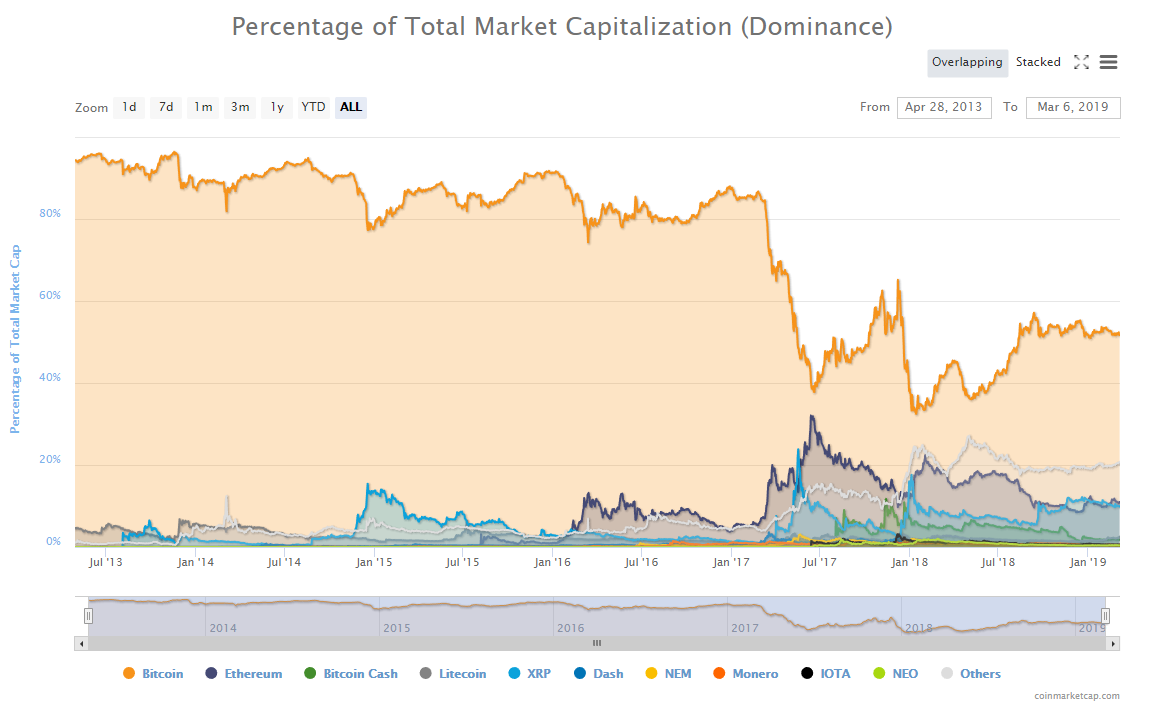 Bitcoin’s market dominance is currently at 51.7% of the total market capitalization of the top 2102 cryptocurrencies, putting it in a healthy position.

Lately, Bitcoin appears to be frozen in its current position, meaning that there will be a breakout point sometime in the future. Bitcoin as the sole currency of the internet may be a harder goal to accomplish than it was back in its hay-day when it had very little competition.