President Nicolas Maduro's plans for a national cryptocurrency - the Petro - have been shot down by the Parliament, which termed the currency illegal and unconstitutional.

It appears that the Venezuelan parliament is not on the same page as President Nicolas Maduro, whose earlier decision to launch a national cryptocurrency – the petro – has been shot down by the legislative body.

Given how cryptocurrencies burst into the mainstream last year, the Venezuelan President’s announcement did not come as huge surprise. According to his initial plan, the Petro, would be backed by real-world commodities like oil, gold and diamonds, and would help the country recover from economic sanctions.

Last week we also reported on a nation-wide recruitment drive for the Petro mining farms, which had, according to claims, resulted in over 860,000 sign ups.

“We are going to call them a special cryptocurrency team…[They will] set up cryptocurrency mining farms in all states and municipalities of the country,” the President was quoted saying.

However, the Parliament has ruled against these developments, with legislator Jorge Millan, as quoted by Reuters, saying:

“This is not a cryptocurrency, this is a forward sale of Venezuelan oil. It is tailor-made for corruption.”

The parliament also warned all investors in the Petro that the digital currency will not be honored after the incumbent President’s term ends.

Further Tweets from legislator Jorge Millan also cited the constitution prohibiting such a sale of the country’s assets, and stated that any money raised via the cryptocurrency would not go towards helping the Venezuelan people, struck badly by inflation. 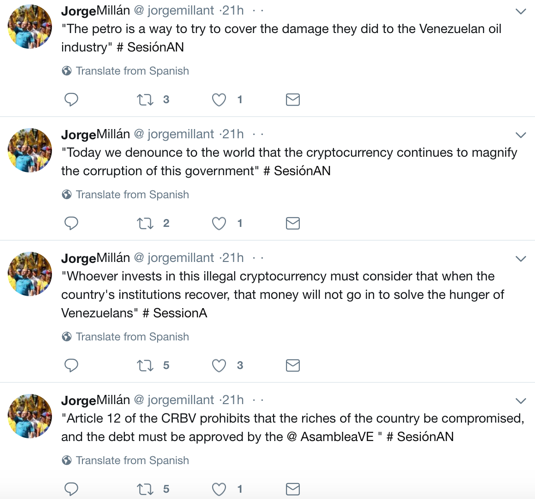 How these developments effect the President’s plans remains to be seen, but potential investors are likely to lose interest, given how they may end up holding a worthless coin after the current regime is over.

Venezuela is not the first country to consider a national digital currency. We have had reports from Russia about the CryptoRuble and the Digital Australian Dollar from Australia, among others.

Earlier this month we also saw the Bank of England dismissing plans for a digital Pound on account of its disruptive potential for the existing economy and banking system.