Use of Bitcoin for Payments Declines Despite Its Bigger Stability - Report

The use of Bitcoin as a means of payments is declining, according to a report by Chainalysis which found that the coin is not suitable for micropayments but is still used by entities to pay vendors, especially freelancers.

The use of Bitcoin as a means of payment by the 17 largest crypto merchant-processing operators dropped from its peak of $411 million in September 2017 to a low of $60 million in May 2018, according to a report by Chainalysis. The report was commissioned by Bloomberg and is aimed to analyze the trends related to the use of Bitcoin for buying goods and services.

In June, these merchant services, which include Coinify and BitPay, received $69 million, down 74% compared to the same period of the previous year. 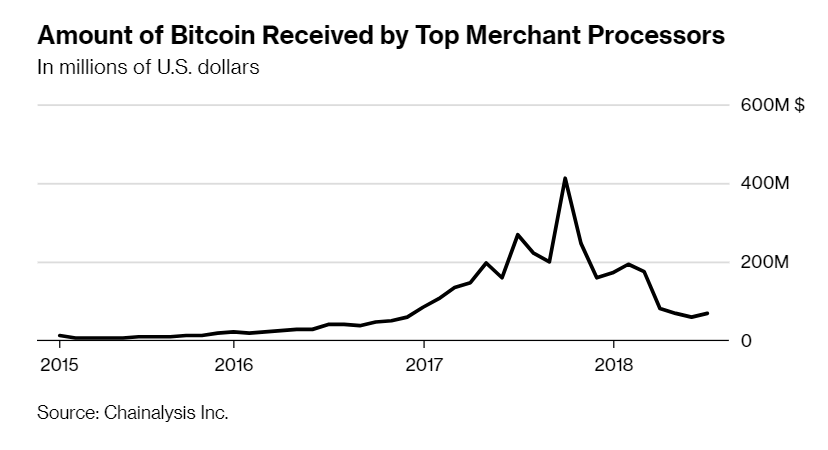 The trend is surprisingly declining even though the Bitcoin price has narrowed its volatile movements and has become more stable. Volatility was regarded as the first reason why the largest cryptocurrency couldn’t replace fiat currencies when buying goods and services. However, it seems that Bitcoin is still mostly used for trading.

The first major drops in BTC’s use for payments came when its price hit a record high at around $20,000 back in December. Despite the fact that Bitcoin has lost more than half of its value since late December, consumers are still wary when it comes to spending it.

Nicholas Weaver, a researcher at the International Computer Science Institute, commented on Bitcoin:

“It’s not actually usable. The net cost of a Bitcoin transaction is far more than a credit card transaction.”

He also noted that BTC transactions could not be reversed, which is often a problem when merchants or consumers want to come up against fraud.

“When the price is going up so rapidly last year, in one day you could lose $1,000 if you spent it.”

“What’s more, high transaction fees have made paying for small-ticket items like coffee with Bitcoin impractical,” she added.

In the last few months, more services, such as Stripe and Expedia, ceased their support of Bitcoin as a means of payment.

As it turns out, the use of Bitcoin for buying goods and services is even more insignificant given that about 66% of BTC transactions have no economic value at all, being carried out by mixers, scams, and mining pools.