Steem Bursts to All-Time High, Predictions of $10 to Materialize?

The blockchain-based social media was the next altcoin to go through sudden growth, rising to $6 and viewing previously unheard-of prices.

For months, Steem (STEEM) looked like a niche coin, related mostly to the use of a single social media site. But in the past week, STEEM burst to all-time highs, and has taken the spot of yet another speculative digital asset.

STEEM retreated a little from the peaks above $6. At the same time, a curious phenomenon is happening to Steem Dollars. The digital asset that was supposed to be tied to the US dollar by algorithm-based interventions, has risen toward $10.

STEEM and SBD are instrumental to the ecosystem of the Steemit social media platform. Users gain Steem by posting, and can either exchange it for Steem dollars and move to fiat, or buy STEEM shares, which cannot be converted back to Steem. But now, Steem dollars have risen way above their intended peg to the US dollar, confusing the users of the platform, as well as investors.

At one point, Steem Dollars reached a peak around $12, while STEEM remained depressed, with a recent low around $0.80 before the sudden recovery. 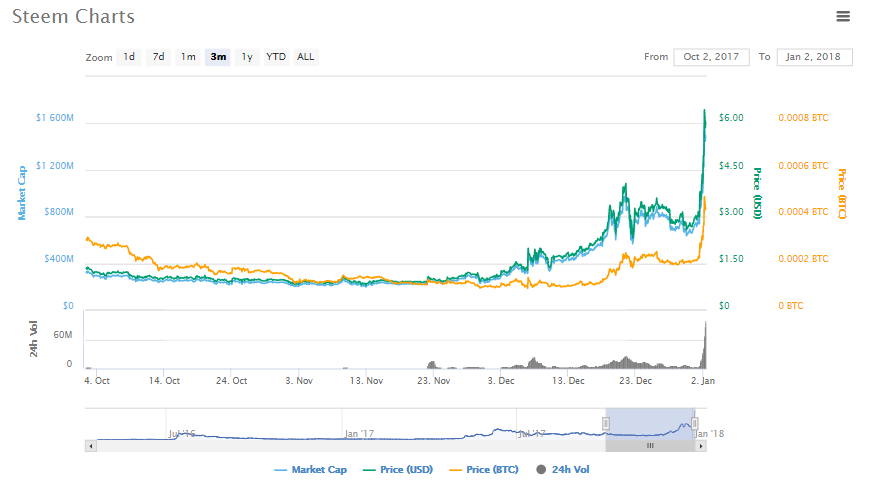 The new rise in Steem may create buying demand on Bittrex and Poloniex, and test the community's willingness to hold the coins, or invest long-term. Some believe the current price spike would be short-lived, and hurt those buyers who enter near the all-time high.

Don't get into $STEEM hype. A super inflating coin with a community of longterm bag holders sitting there to dump on you. The only reason for these price movements is because of the fact that #STEEM has many locked coins but tones of them waiting to be dumped ASAP

Some, however, believe a price of $10 is doable in the short term, while the Steem coin remains an asset to put some funds into for 2018.

However, STEEM has not by any stretch reached a true recovery against Bitcoin, and may sink again if Bitcoin gains traction. STEEM mostly relies on trading on Bittrex and Poloniex, and the current rally may be short-lived.

Some are comparing STEEM to Facebook, and while its tokens are not shares, but a tool within the social media, there are expectations the Steemit project may be worth more if it became more popular.

But at the moment, STEEM remains very volatile, only touching briefly a peak at $6.45, to sink back again to lower levels.