As this new asset is gaining more attention, scams are abounding, including a compromised web wallet.

Compromised web wallets are nothing new for cryptocurrency users who have been around for a while, as it is usually a danger easily circumvented by a bit of foresight. However, as new assets are coming to the frontlines, a new crop of users may be fooled, as in the latest case with a compromised web wallet for RAI Blocks (XRB).

Users are urged to use the official web wallet:

The recent scam, which was a case of phishing for private keys, was MyRAIWallet:

We just got word that MyRaiWallet, the scam/phishing wallet, has been taken offline by the registrar. Stay safe out there, everyone.https://t.co/mF3S48DQog is our official web wallet. It's great! $xrb

The newly popular XRB coin, which appreciated from $0.23 to a peak above $30 in December, is also getting added to more exchanges, beyond Mercatox. The asset has also won the Binance vote, which was rather contentious. New listings may see higher liquidity and a boost in the market price, but XRB remains rather volatile.

$XRB trading is now live on our biggest exchange to date, @kucoincom!

RAI Blocks has shown some price resilience, after dipping to $18, but recovering toward $30 once again.

What is curious, is that even the rapid rise of XRB, the coin is seen as one of the bigger potential gainers for 2018. At the same time, jumping into XRB has hidden risks, as exchanges have no known record of handling the coin, providing safe deposits and withdrawals, as well as general security from theft and crashing.

The search distribution for RAI Blocks is also rather curious, coming in from Northern European countries, in addition to Australia. 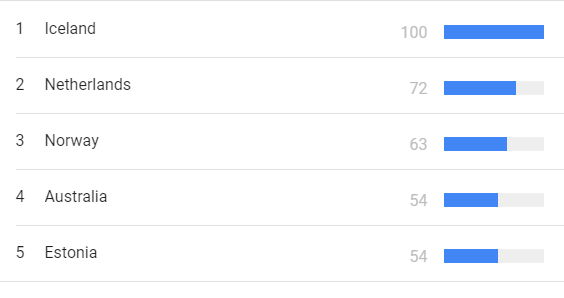 But with the ascent of Korean exchanges, XRB may change its popularity profile. So far, users do not see the currency spread to Chinese users.

RAI Blocks has also seen criticism from users that its core wallet is having glitches. While core wallets offer a higher security, problems with synchronization and displaying balances is pushing users back to using the web-based wallet. And while the web wallet also gives access to the private keys, this increases the risk of phishing scams.

RAI Blocks remains a project in progress, creating risks of price volatility as great hopes for growth clash with still unresolved technological issues. And while RAI Blocks may be promising, it is best to avoid over-investing, or buying at an all-time high, since the trends for this coin reverse rapidly.