A lot of investors may be getting burned by OTC-traded businesses that only have a tangential relationship to blockchain technologies, but their stock price soars dangerously.

Pink sheet companies are extremely stubborn, and have an easily recognized behavior pattern. A lot of companies would quickly glom onto trends, change their name and ticker, gain instant fame and possibly pay for a coordinated campaign and pump.

In the past, OTC-traded companies, mostly pink sheets, have gathered around several mainstream industries - generic drugs, shale gas and oil mining, other mineral rights, medical marijuana and a few other sectors. While some companies held on, others crashed and burned. In the notorious case of GrowLife, the SEC had to intervene and suspend trading.

But now, a new crop of OTC-traded small companies is rising, with a new danger to investors. The new hot keyword is "blockchain", and pink sheet companies have just the right recipe for disaster.

These companies are very different from ICO startups, and may hold even more risk. At least ICO projects strive to build a team and establish their presence. In the case of pink sheet companies, it is hard to tell which ones would remain as a semi-stable investment, and which ones are out for a quick hit-and-run round of earnings.

Recently, the SEC had to intervene again, this time in the case of Ubi Blockchain Internet, Ltd. (UBIA).

It must be noted that so far, the SEC has intervened in very few cases of actual blockchain startups, but in several similar cases where "blockchain" was merely a buzzword to quickly promote an OTC ticker.

In the instance of Writ Media Group (OTCQB:WRIT), the company has even announced it would launch a digital asset, Pelecoin Cash. At this point, the asset does not even exist. Despite the fact that Writ Media group lists as its main activity digital media and cryptocurrencies, it has not even bothered to create an actual token.

The creation of a token would be an indelible record, quite unlike the possibility to change tickers, dilute stocks and change the company name. In the case of WRIT, it was formerly named Writer's Group Film Corp.

In cases like these, it becomes clear that running a blockchain business is much more transparent compared to the far riskier OTC small cap companies. While there are many defunct tokens, the more public ones gain attention and a crash cannot slide off the radar that easily. 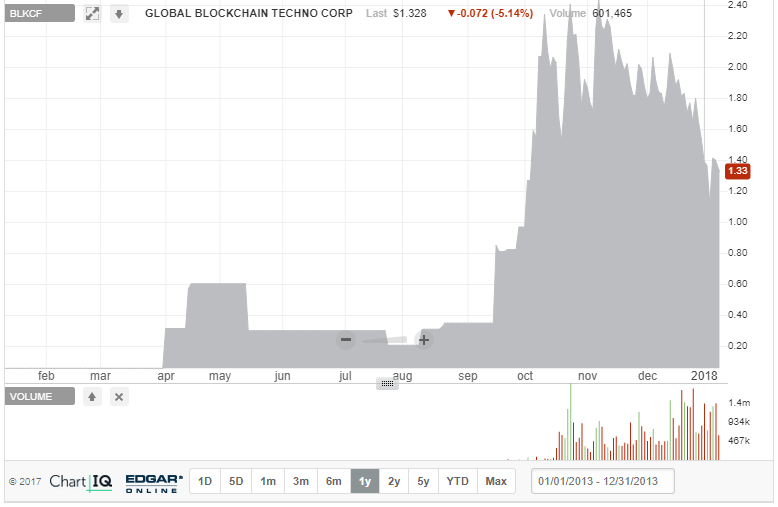 It was the name change that made the stock explode in volumes and prices, staging a series of pump-and-dump events.