Cryptocurrency Nexo has gained over 35% after announcing an interim dividend payment to be made on December 15, 2018.

Nexo, a cryptocurrency in the top 60 coins by market cap as shown by Coinmarketcap data, gained on Tuesday 35.5% as of 11:52 UTC. The coin has demonstrated the largest daily gain in the last few months after announcing a dividend payment to Nexo token holders.

Nexo is a cryptocurrency-backed loan platform that allows users to borrow fiat US dollars by using cryptocurrencies as collateral. To ensure the security of crypto funds, Nexo is partnering with Nexo partners with BitGo, a blockchain security firm backed by Goldman Sachs.

On Monday, Nexo announced that it would hold a dividend distribution worth $912,071. To become eligible for the dividend payments, investors have to go through advanced verification procedures and store their Nexo tokens on the platform before December 5, 2018. The payment will be made on December 15.

“A meeting of the Board of Directors of Nexo Capital Inc., convened today, approved a decision regarding the distribution of an interim dividend of $912,071.00 for the financial period through November 30, 2018,” the announcement reads.

The dividend will be offered in Nexo tokens based on the NEXO/USD rate of US$0.104256, which was recorded at the close of November 30.

The announcement seems to have attracted investors’ interest, as the price exploded despite the overall bearish sentiment, with the top ten coins being in the red. 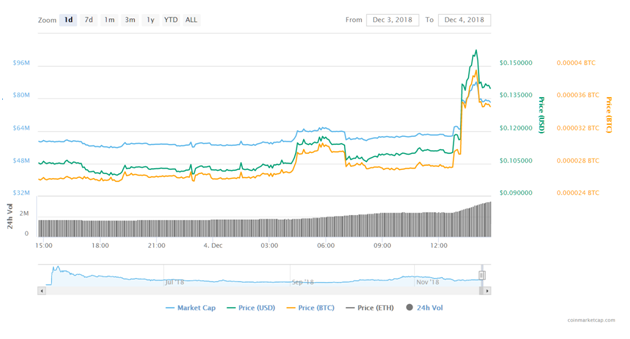 The 24-hour volume of Nexo trading reached $3.5 million, with Hotbit accounting for over $2.2 million of it.

Thus, Nexo is currently the largest gainers among the top 100 cryptocurrencies, followed by Waves and ODEM.

In August, we reported that Nexo partnered with crypto payments platform UTRUST to provide a delayed payment solution to the blockchain community.