Nasdacoin has increased by over 300% in the last 24 hours, which makes it by far the best performer in the top 100 cryptocurrencies.

In a period when the overwhelming majority of the top 100 cryptocurrencies are in bold red, Nasdacoin, a digital asset that no one heard before, has gained 321% in the last 24 hours and ranks 68th on Coinmarketcap’s list. On Wednesday, November 14, the coin was trading close to $1.00, but it has just moved with impressive bullishness to $4.14 as of Thursday, 11:38 UTC, which translates into an increase of more than 300%. 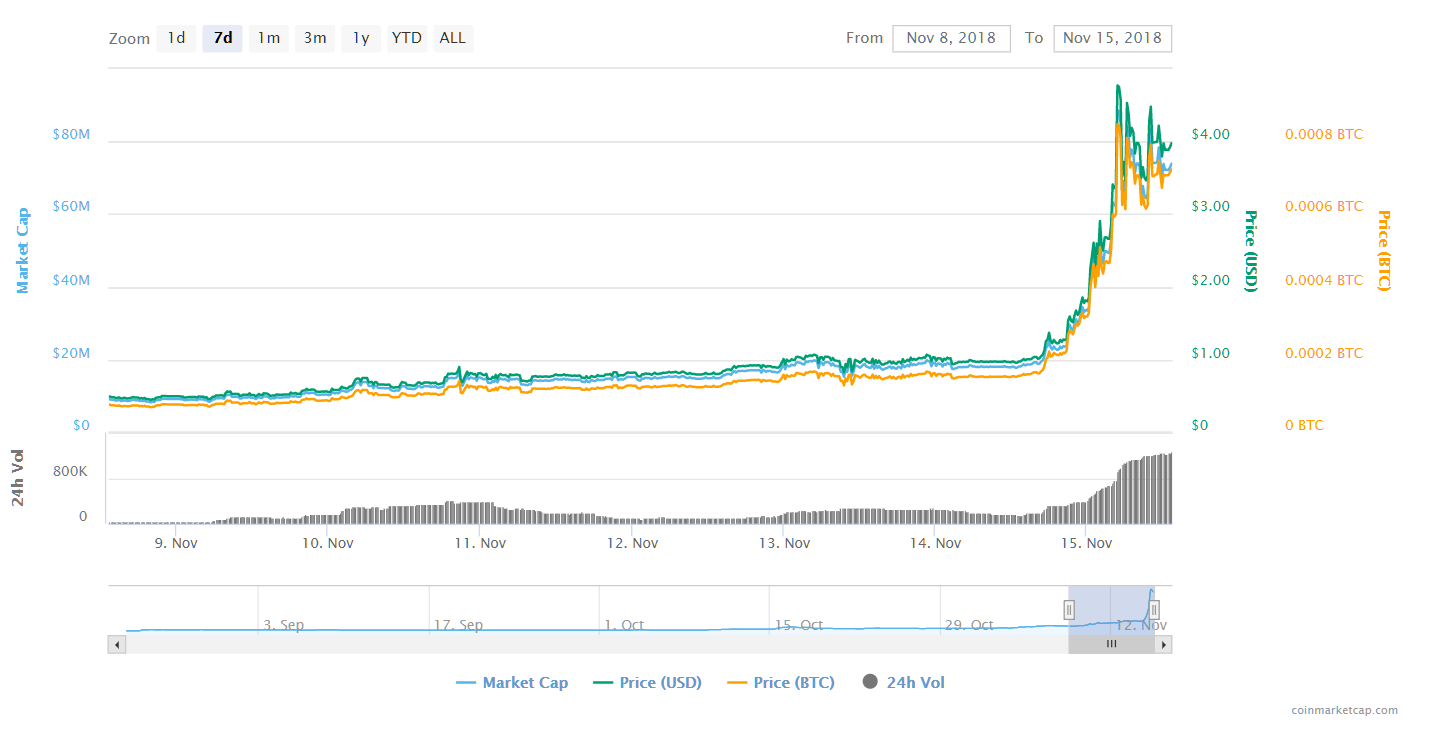 At the moment, it is difficult to understand whether the coin jumped naturally on some strong fundamentals or if the latter were only a pretext to deploy a pump and dump scheme managed by some groups behind it. We have already seen similar moves made with Bitcoin Diamond for example.

In fact, there are some significant events that recently happened with Nasdacoin. On October 30, 2018, the team launched Nasdacoin Multilateral Platform, a marketplace that connects buyers and sellers of various products. The marketplace is fueled by this new cryptocurrency.

However, the real reason behind the surge is the listing on several cryptocurrency exchanges. On Wednesday, shortly before the price craze, Nasdacoin said via its Twitter profile:

Right after this tweet, Nasdacoin started its bullish move even though the rest of the top 100 coins were moving in the opposite direction, with Bitcoin, Ethereum, EOS, and Litecoin losing over 10%.

Currently, the market capitalization of Nasdacoin is above $75 million. In the last 24 hours, crypto exchange Crex24 accounted for 91% of the Nasdacoin’s trading volume.

The rise of this unknown coin is interesting, especially when its 20-page whitepaper is quite modest, to say the least. The document explains the principles behind the coin:

“Nasdacoin is an encrypted and decentralized virtual, open source, peer-to-peer currency, developed with the scrypt algorithm in the POW/POS Hybrid format, allowing people with entrepreneurial and passionate financial and technological market profile to store and invest their wealth in a safe currency not controlled by any government and even earn a substantial amount of interest on the investment.”