Litecoin is positioning well for a bullish continuation towards $90, as the project edges closer towards its block reward halving event, and developers announce the release of Litecoin’s new Core v0.17.1 update.

The Litecoin halving event, which is scheduled to take place in 87 days on August 6, will see LTC block mining rewards reduced from 25 LTC to 12.5 LTC.

The halving event takes place after each tranche of 840,000 blocks has been mined, and aims to increase scarcity by reducing the amount of Litecoins that enter the market during the coin’s mining lifecycle. By gradually stifling the supply it ensures that the market value of the underlying asset steadily grows over time, and helps to prevent over-inflation as demand for the coin rises.

Whenever a coin undergoes a halving event, it is usually preceded by a strong bullish surge in momentum as traders seek to capitalise on the shrinking supply. Bitcoin in particular, has a history of surging up to a year before its halving events - with the next bull run already underway as the May 2020 halving approaches.

The latest Litecoin core update has been released this week, which boasts a number of promising new features and bugfixes, according to the official announcement. Perhaps the most interesting development is the 10X reduction in the default minimum transactions fees, which now stands at 0.0001 LTC/kB. The reduction has been implemented to encourage the wider adoption of Litecoin and make LTC more cost-effective as a retail payment option.

Today the #5 cryptocurrency has broken over the $75 mark with an increasing 2.76% gain against the US dollar. 24hr trading volume has also seen a marked increase of $500 Million from $2.6 Billion to its current levels around $3.1 Billion, as traders respond bullishly to the recent developments. 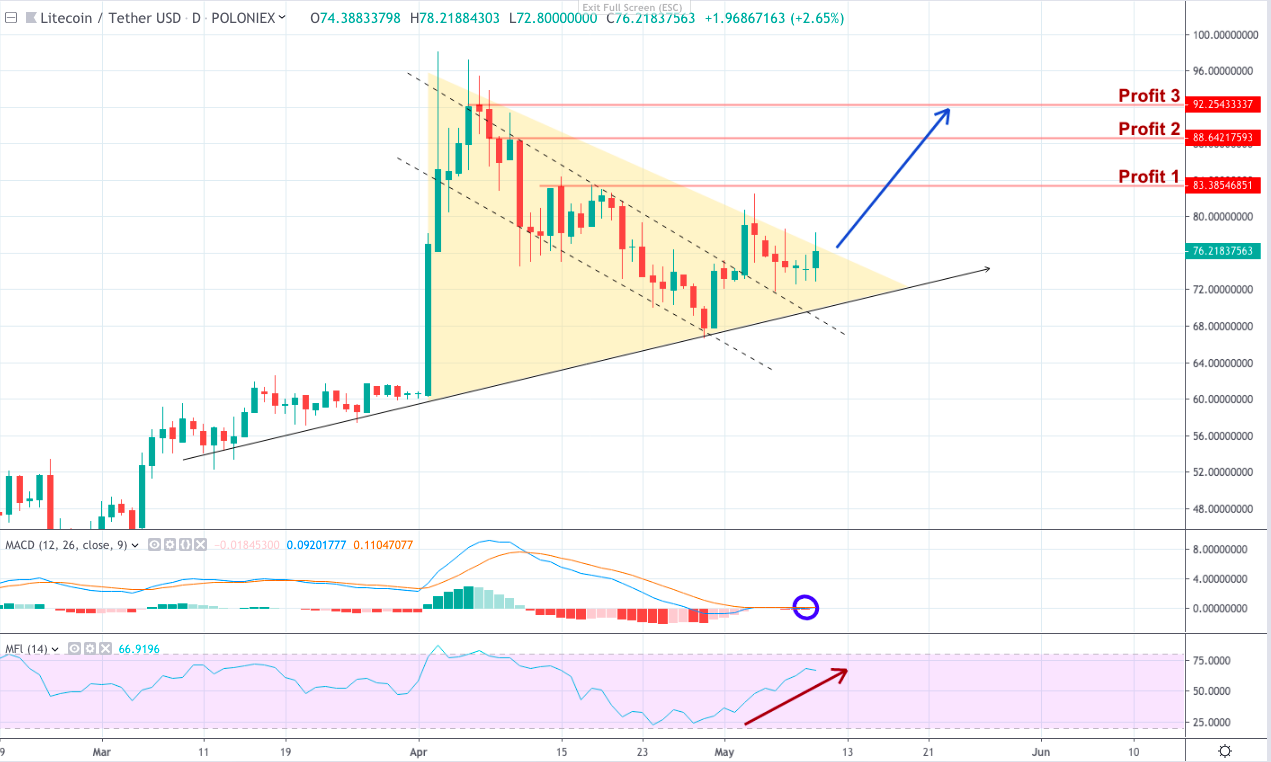 On the 1D LTC/USDT chart we how the aforementioned bullish catalysts have had an effect on the recent price action.

Since March 11, the asset has been tracking well along a strong uptrending level (black line), which has offered strong support for LTC as it continues to make higher lows.

After exploding to a new YTD-high at $97 on April 3, the asset started to correct inside a narrow falling channel until it found the safety of the uptrending support again.

From there, renewed bullish momentum helped to break free of the downtrending channel and carry LTC towards the downtrending resistance of a new bullish pennant pattern that has now taken shape (yellow triangle).

Over the last week, the price action has struggled to overcome this new resistance with several unsuccessful attempts. Now however, there are a number of promising signals starting to emerge which suggest a bullish breakout towards the asset’s former highs is looking likely.

Over the weekend we could see a brief pullback towards the uptrending support below as trading activity drops, but as long as it continues to consolidate inside the pennant then we should still expect a breakout to occur.

All ROIs are calculated from the asset’s current value at $76.20 (AToW).