Sometimes, an obscure coin will spike, to a surprising degree even by cryptocurrency standards. This time, the dramatic rise belonged to Janus Coin (JNS). However, it's notable that the rise has happened on a single niche exchange, and against the NXT token. Translated into dollar value, JNS rose to a peak of $12.63 before retreating slightly.

The trouble is, JNS is a virtually unknown coin, with no social media presence, and no real demand. The spike, therefore, may be a one-off experiment, which says nothing about the potential of cryptocurrencies. 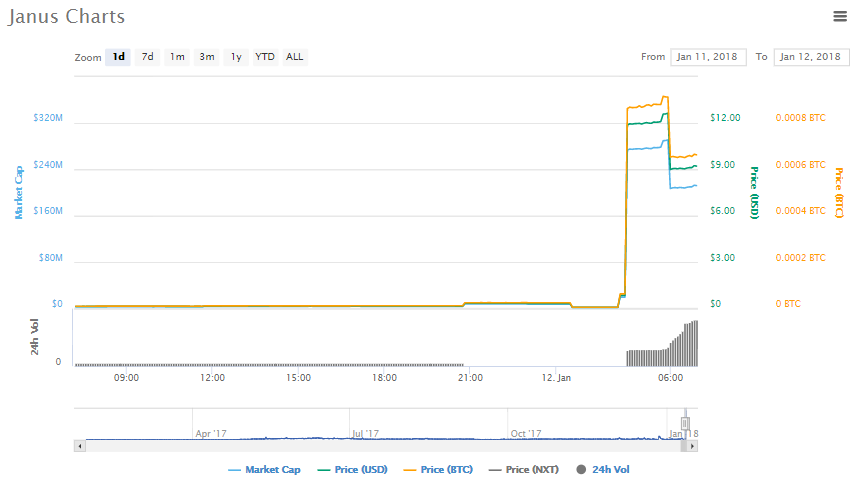 What is really curious, is that JNS trades at vastly different prices depending on exchanges. The coin has a small presence on C-CEX, the newly created London-based exchange, which hosts many obscure tokens. The price there is just 11 cents in pairing against BTC.

It is nothing unusual for coins to have pumps and dramatic spikes. But the case of JNS is outright market manipulation. JNS has spiked before in a similar fashion, which looks like an attempt to jump-start interest in the previously unknown coin.

Right now, the JNS token has its fate tied to the group of projects related to the NXT platform. JNS utilizes the built-in NXT platform, but it may continue to trade on the Ardor platform, and its offshoot, Ignis. However, this usage of decentralized exchanges has no guarantees for a higher token price, or an inflow of real liquidity.

The JNS token will exist on the Ardor blockchain in the future, a project related to Komodo (KMD) as well as NXT. In this regard, it resembles Ethereum-based tokens, only with a much lower popularity.

Users believe that using Ardor at this point is not a feasible alternative to centralized exchanges:

" The biggest problem is that the average people find the ardor platform too complicated compared to exchanges such as Bitrex," wrote one user on Bitcointalk forums.

Hello @AEX_COM email sent to support regarding an issue we had with account, please respond. We sent to your Gmail from [email protected]

The Janus project has also released announcements that it is aiming to get listed on AEX Exchange. Also, the project is building a proprietary mining facility.

But the price spike is seen not as a result of the news or developments, however positive. In fact, it may be seen as a whale mopping up the sale orders from the small experimental exchange, or possibly an error in order-making, mistaking $0.11 with $11. It must be noted that the orders at the higher price were extremely thin.