DOGE: The McAfee Coin of the Week

DogeCoin is making it big, with a price of $0.016, a price previously thought impossible. And now, the humble meme coin has become the McAfee coin of the week, no hacking or jokes.

Coin Of The Week: pic.twitter.com/9KqCP5Af7r

Even after the fast and fierce correction of the last hours, DOGE keeps its position.

The DogeCoin community began with great enthusiasm, before getting shaken down by scams and a defunct tipping bot. But in the past month, DOGE has risen smoothly, increasing its value up to four times, as the community is strengthened again. And it may turn out that at one cent, users have lost quite a bit of coins.

The Reddit DogeCoin community has grown to 100,000 subscribers, with many other users not interested in communicating, but using DOGE, including Venezuelans. 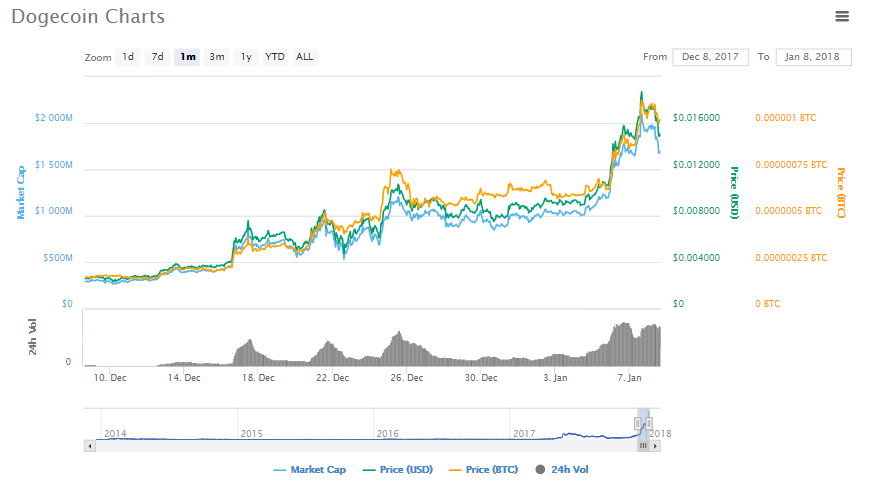 DOGE is one of the few coins widely used for online shopping. It is also a way to move funds between exchanges, and has a surprisingly wide array of trading pairs.

What is curious is that DOGE appreciates despite the fact there is no cap on the total number of coins, and new ones are issued all the time. At the same time, DOGE invites record volumes of upward of 18,000 BTC. Bittrex and Poloniex remain the most active DOGE trading hubs.

DOGE is available in a total of 400 trading pairs, giving access to obscure tokens. But it trades most actively against BTC.

But as newcomers to the world of cryptocurrencies become more numerous, there has been talk of listing DOGE on Binance. There is a constant inflow of newcomers to DOGE, but so far the coin has not seen a climb like TRON, and remains a very accessible asset.

Jackson Palmer, the creator of DogeCoin, has been surprised by the success:

Rather than repeat myself, here are my thoughts on what is happening with #Dogecoin and cryptocurrency in general right now. https://t.co/89RUalB96p

But he still believes the valuations are over-inflated. Still, DOGE is actively traded and its usage adds value.