CV Market Watch™: RAI Blocks Shoots Above $30, Is It Overheating?

An underdog for a while, RAI Blocks continues to rally, but can it hold onto the new price range?

In the final stretch of last year, many formerly unknown digital assets shot to fame, and turned out to have a strong community behind them. RAI Blocks (XRB) is one of them, and it continued to conquer milestones, as its price was bid above $30.

RAI Blocks is still traded on smaller exchanges such as BitGrail and Mercatox, though volumes have increased quite a bit, to more than 5,000 BTC in 24 hours. As the price of Bitcoin falters, investors in RAI Blocks have also for now avoided the fate of a lot of altcoins- a lucrative investment in dollars, which, however, left them with much less Bitcoins in the end. 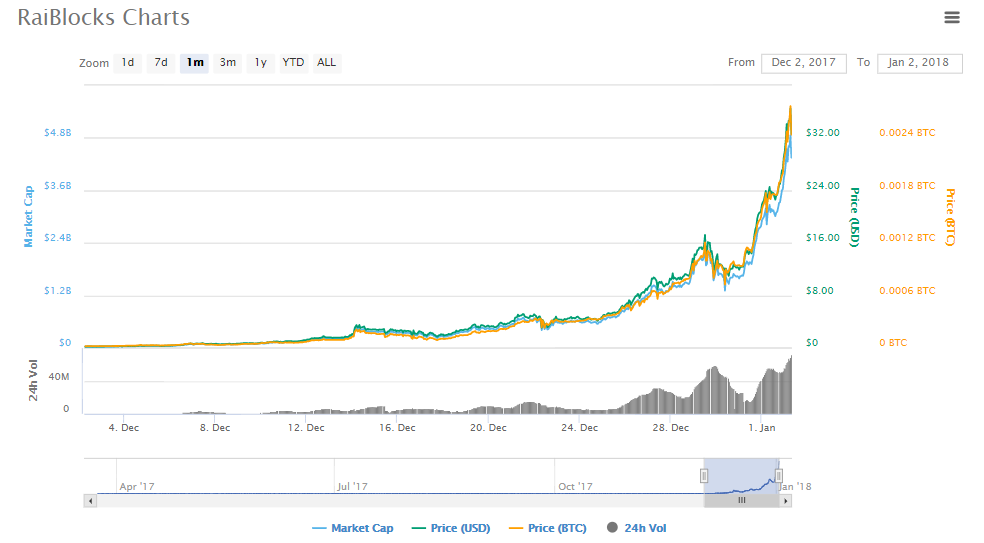 This time, RAI Blocks is also seen as a decent opponent for Bitcoin, citing the central feature, a faster network. And yet RAI Blocks will have to prove that indeed its transactions work fast and are free, as for now only a handful of users may be sending transactions.

The YapRai Shop is still not working, and there are no known data for transaction speed.

At the moment, RAI Blocks is fairly distributed, as all coins have been created and distributed through a faucet, which shut down in October last year. Since then, RAI Blocks continued with the rapid rise, growing more than 100-fold.

However, network issues and missing balances were still reported. And while RAI Blocks has been called a "Bitcoin killer", it still have to prove its network is indeed stable and usable, with no balances lost. For now, this is a major concern for users.

Raiblocks is fundamentally flawed and suseptable to various DoS attacks.

Others believe RAI Blocks is too hot right now, and the technology is not stable.

At the same time, RAI Blocks has done what Verge (XVG) performed, an overheated feat broken by a fast correction.