OmiseGo (OMG) is growing slower compared to similar projects, but it holds promises for 2018.

The market price of OmiseGo (OMG) has been much tamer compared to the leaps and bounds in some coins and tokens. OMG has tripled its price over the course of a few weeks, to repeat records above $20.

The OMG token has also broken the $25 record, and the growth has been relatively slow, including setback periods. 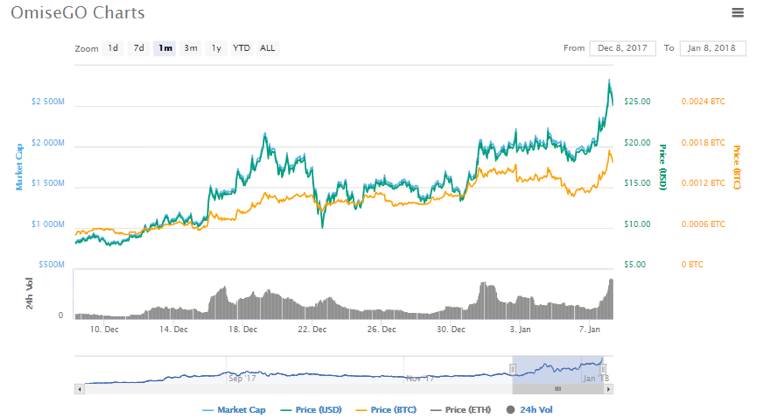 The past month has been choppy for OMG, but the upward trend is preserved. Still, OMG remains volatile and has periods of deep losses.

In very positive fundamental news, the OMG project gave signs it is on the expansion track in 2018. The financial services blockchain firm will aim to attract more talent and push the development of its fintech products.

However, the real boost for OMG may come with its product releases. For now, OMG remains a speculative token, in waiting for the actual project to deliver results.

Ok just to tone down the excitement a bit, some clarification: MVP != running network, and "soon" != tomorrow. But it's real and it's definitely coming. We'll open the codebase soon. Slow and steady wins the race. ✌

OMG has a working relationship to the financial business of Omise. But the ambitious aims of building its proprietary network, with a form of side chains and off-chain settlement, may still take months to arrive. For now, OMG aims for "minimal viable implementation" of the Plasma technology. Right now, only testing has happened.

The price of OMG has seen months-long depressions, trading easily below $7. And while the latest climb is more robust, OMG has not seen pumps resembling those of lower-priced assets. OMG remains a long-term investment opportunity, with fewer short-term rewards.

What is curious is that OMG trades at a premium against the Korean Won, at above $34 on CoinNest, and above $31 on Coinrail. But the Thai-based company with businesses in Japan has lagged in trading behind NEO and other Asian-based projects.

The next expectation for the OMG price may be $30, and from then onward the decision to hold or sell the token depends on the plans to hold it long-term or trade it. While OMG is available through Shapeshift and the Exodus wallet, buying in now may meet with problems, as tokens that grow unusually fast are sometimes unavailable through those exchange services.