Binance Coin (BNB) has been a strong performer during the recent bull market frenzy that’s taken hold of the crypto space.

In the last 48hrs, the #7 cryptocurrency has risen nearly 20% to a height of $24.68 before correcting, with trading volume spiking by more than $75 Million.

Today however, the asset appears to be losing momentum after failing to break new ground above the $25 level. Right now the asset is up around 4.09% against the US dollar while a number of other alts in the top 10 are reporting double digit gains.

The price action on the 30min chart is also beginning to show worrying signs of a bearish reversal, as candles continue to consolidate inside a rising wedge pattern. 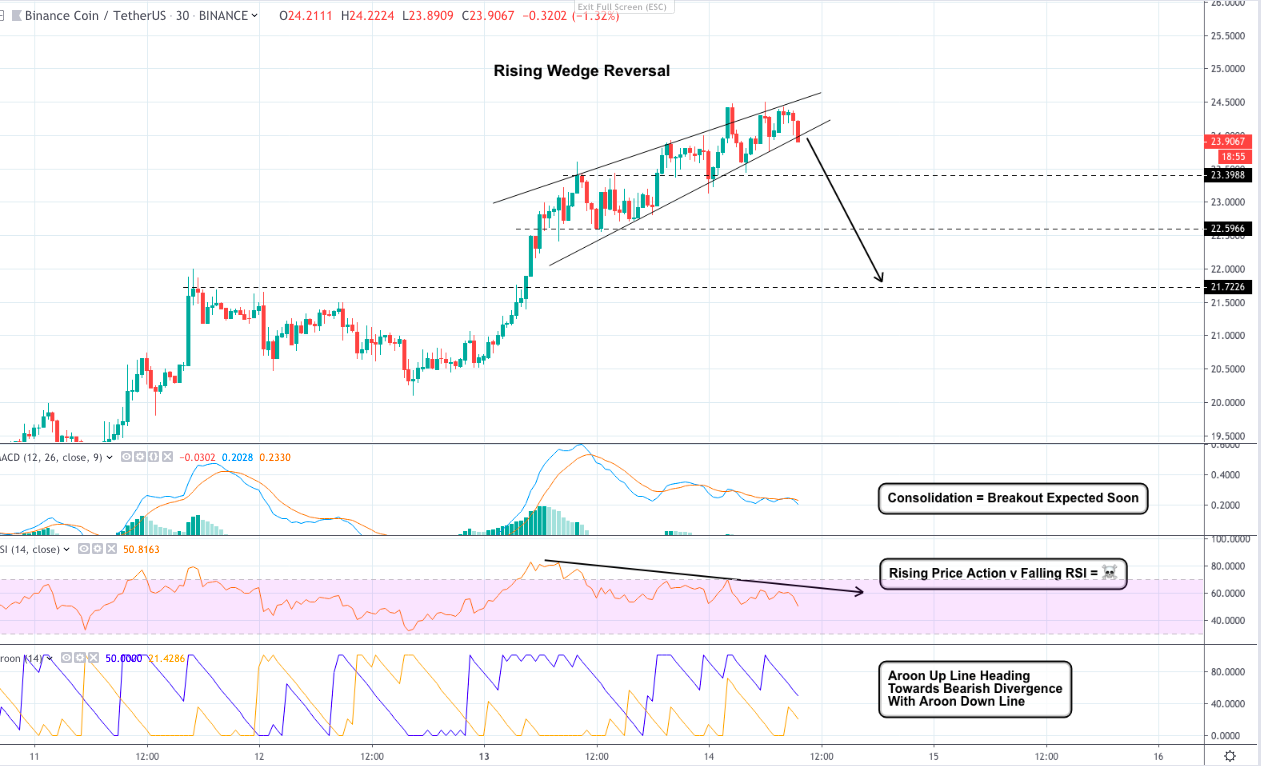 On the 30m BNB/USDT chart we can see that the asset has tracking inside a rising wedge for the past 24hrs, making consistently higher highs and lows between two pinching trend lines.

Typically, this pattern foreshadows a bearish breakout once the price action reaches maximum consolidation between the uptrending support and resistance levels.
Rising wedges form when bullish sentiment starts to thin out, as the price action closes in on a major resistance level. In this case, the $24.68 level. Each bull run that launches off the lower support gradually becomes smaller until buyers eventually become exhausted, and bear traders take over.

Looking at the 30m indicators, we can see a number of bearish signals which confirm BNB is heading for a bearish decline;

Once Binance withdrawals reopen, it is also likely that we will see an exodus of money move out of BNB and into other coins as traders prepare for an altcoin rally. This should exacerbate BNB’s decline and push it down on to lower supports.

The $23.40 level is likely to be the first major support for BNB during the opening breakout. From there, the $22.60 support could provide bullish traders with an early pushback opportunity provided panic selling doesn’t ensue. If that fails, then the $21.72 level looks like the next best possible support for the asset.